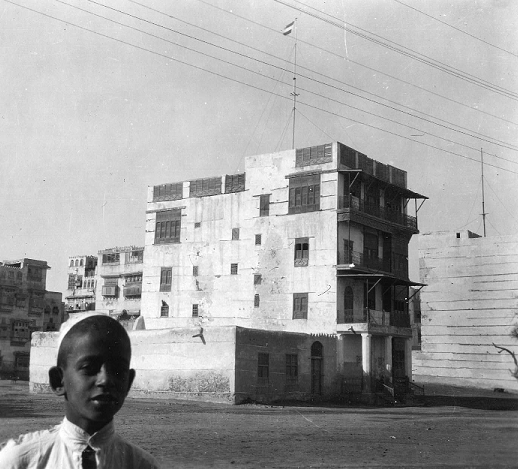 What surprises me now is that, after the independence of Indonesia in 1945 or the disastrously slow acceptance of that fact by the Netherlands, the keys of the consulate in Jeddah were not handed over to the government of Indonesian president Sukarno. As promised in a previous blog on the origin of Dutch relations with Saudi Arabia, the reader will find here, initiated by a twitter from the Dutch embassy in Riyadh, which prompted a bit of online research, an iconographic history of what was once principally the consulate of peoples of many races and trades traveling to Makkah and Saudi Arabia for pilgrimage and sometimes for doing a little business to make all things safer and better. So at least I hope. In art sometimes the science becomes a logical part of the projection.

The picture posted first here (nr. 1) is that of – probably the first – building of the consulate, which was there on the basis of photographic evidence at least in 1924 and is probably the same building as the one in which the well known scientist Christiaan Snouck Hurgronje made his pictures of pilgrims in 1884. The photograph is kept in that part of the Dutch public collections, which is managed by the Tropenmuseum in Amsterdam. There too they keep, from the same photographer, an image made in 1945 of what must have been the second building of the consulate in Jeddah. That is the next image (nr. 2).

2. New consulate building of the Netherlands and Indonesia in Jeddah in 1945. Photograph by Daniel van der Meulen.

Was there another – hence a third – building in the beginning, so in 1872 or just after that? There exists an old print after a drawing by consul Willem Hanegraaff in the Royal Library in The Hague. It can be accessed online on the website Geheugen van Nederland, which translates as ‘Recollection of the Netherlands.’ Hanegraaff was the Dutch consul in Jeddah from 1873 tot 1878, according to the National Archives, so in these years we expect him to have made the drawing. It might have been another building, but both basic volume and style seem to fit the building in image number 1 and the images nrs. 11 and 12 which follow later. So it might equally, I think so, be possible that the building was re-arranged at some point in time. Adding probably a new facade on the side of the consul’s house with a nice veranda, while the back was in use as the chancery. Who actually owned the building, a family from Jeddah or the Dutch government itself? I don’t know, but have a look at the drawing. It shows a flagpole, but also a crescent moon (top, right) as if to demonstrate that the building is an Islamic house which is only hosting a foreign consulate. For as long as they behave, I guess. 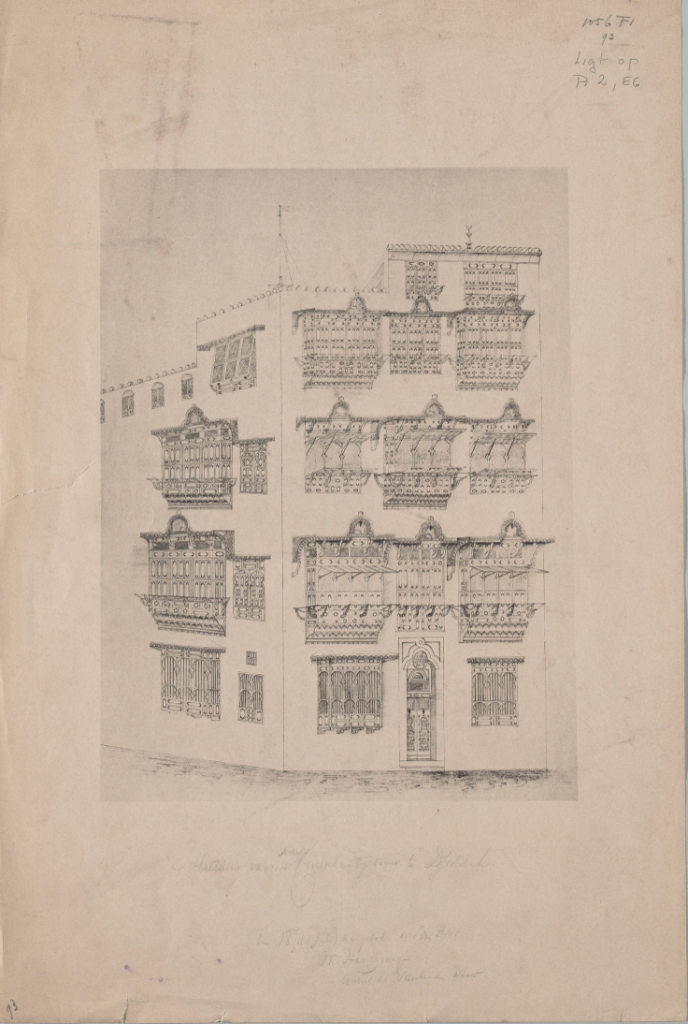 3. Consulate of the Netherlands and Netherlands East Indies in Jeddah. Print from a drawing made by 1873-1878 consul Willem Hanegraaff. Royal Library, The Hague.

Let me share more images for both buildings and their sources to get a better idea.

The North side of the old building and its surroundings are seen on image nr. 4, which is a photo by provenance connected with image nr. 5 with consul C.O. van der Plas (1921-1926) at the entrance of the building. Both photos are in the collection of Leiden University’s KITLV Collection. 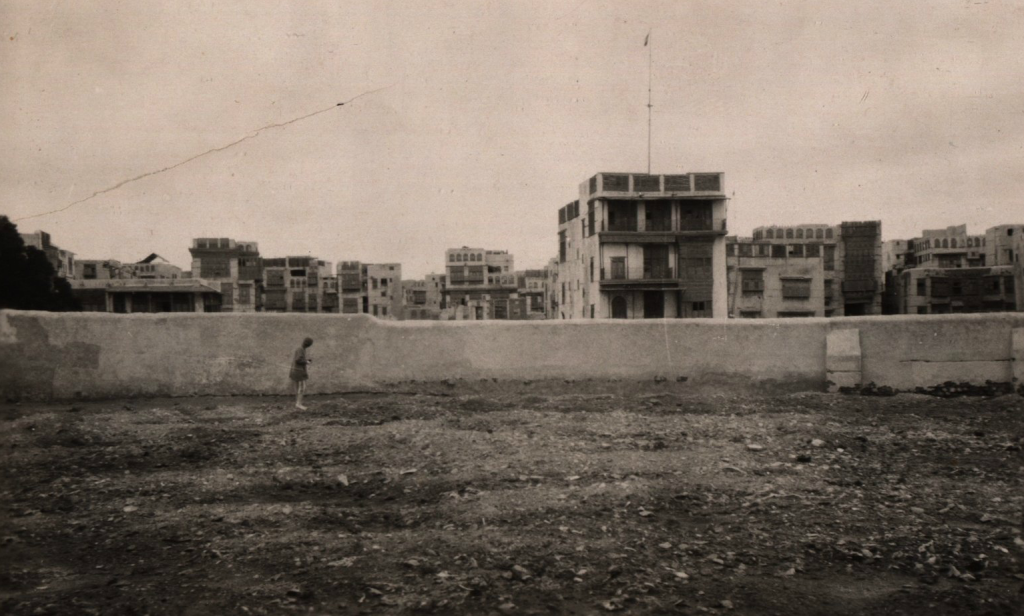 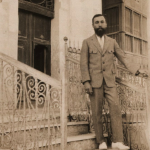 5. Dutch consul Van der Plas in Jeddah (1921-1926) in front of the consulate building. From the KITLV Collection.

More footage, this time, of the building one finds in the 1928 documentary that Krugers Filmbedrijf made for Indonesian movie houses: Het Groote Mekka-Feest about the pilgrimage. I made some print screens of that movie to further identify the consulate building. Images nrs. 6, 7 and 8 are of the North side. At least I presume for now that it was North. Probably in reality a little bit more North-West. 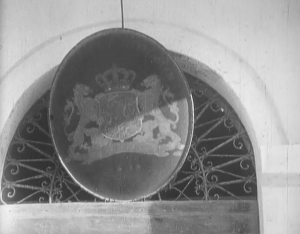 6. North side of the Netherlands consulate in Jeddah in 1928. Krugers Filmbedrijf documentary. 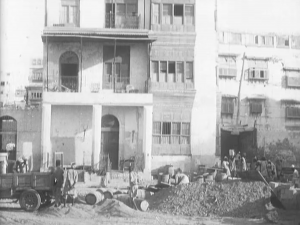 7. North side with consul’s residence of the Netherlands consulate in Jeddah in 1928. Still from Krugers Filmbedrijf documentary. 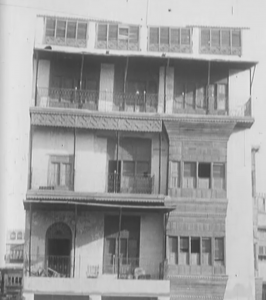 8. North side with consul’s residence of the Netherlands consulate in Jeddah 1928. Still from Krugers Filmbedrijf documentary.

Then reposted on an Arabic website from elsewhere I found an image (nr. 9) of the same building, which shows it was close to a gate, which I believe on the basis of the location of the second building is probably on the north side of town close to where now still stands a probably re-erected and slightly moved historical gate. The date suggests 1917, but not what the source for that information is. 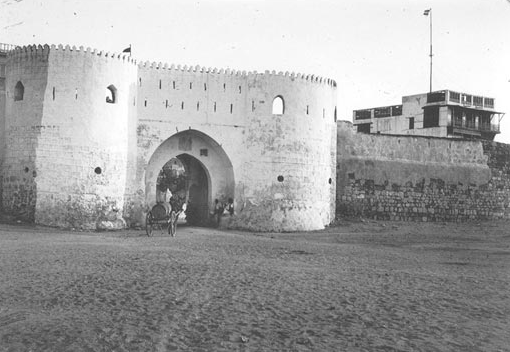 One might get confused by images from other sides of the building in both the Krugers Filmbedrijf documentary (nrs. 11 and 12) and on a photo (nr. 10) in the archives of the Maritime Museum Rotterdam, shown on the maritiemdigitaal.nl website. But it all fits nicely. Nr. 10 shows the West side of the building. You can see the profile of the verandas on the North side in the shadows. Both images nrs. 11 and 12 are from the back or South side – we can see the lower courtyard now to the right (compare that with image nr. 1). Clearly the consul uses the North to live and receive, while pilgrims assemble at the back and chancery side of the building. If you compare the style of the windows on this side with those in image nr. 3 of the drawing of the 1870s buildings it seems that this side might well be of that original period. 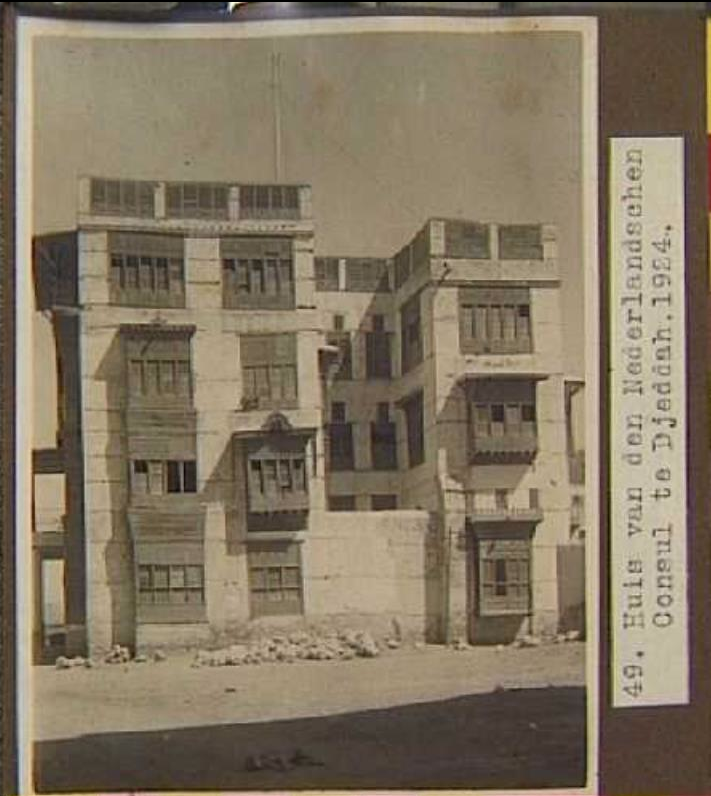 10. West side of Netherlands consulate – its says the consul’s house – in Jeddah in 1924. Maritime Museum Rotterdam, Koninklijke Nedlloyd Collection. 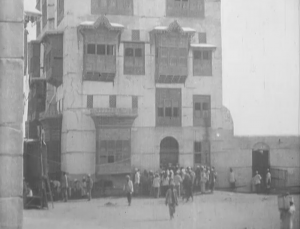 11. South and West sides with chancery and pilgrims of Netherlands consulate in Jeddah in 1928. Still from Krugers Filmbedrijf documentary. 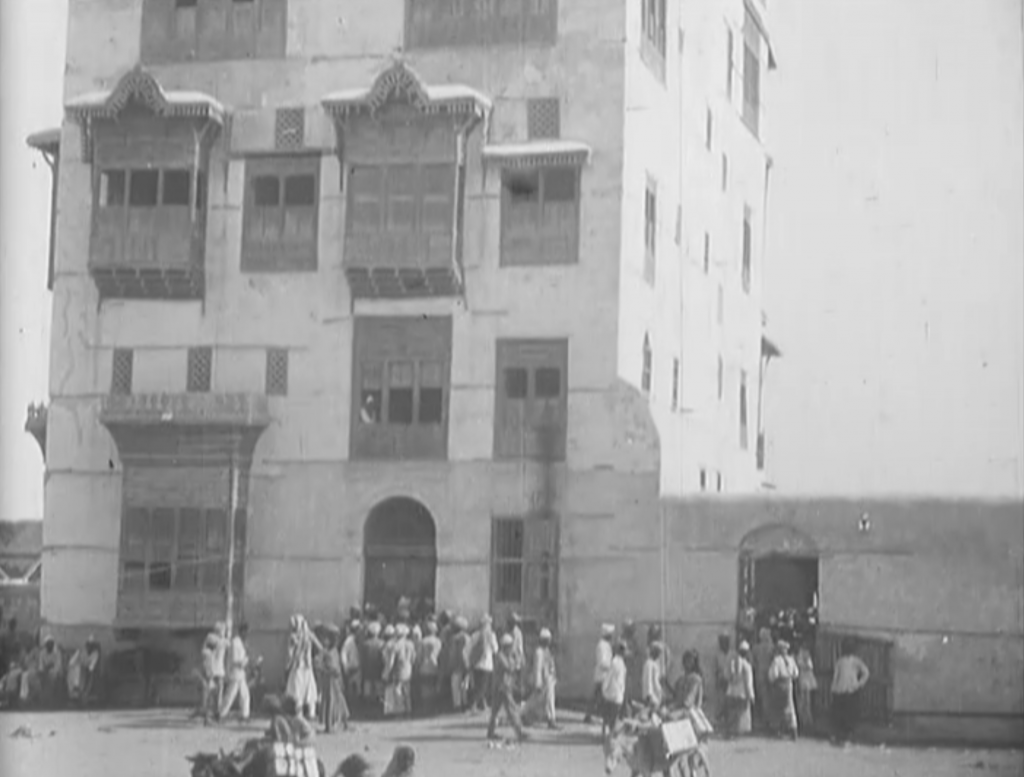 12. South and East sides with chancery and pilgrims of Netherlands consulate in Jeddah in 1928. Still from Krugers Filmbedrijf documentary.

I will leave it here and come back to the second building on another day. Need also to find out on which courtyard Snouck Hurgronje made his pictures. I think the narrow one inside the building that opens to the West.

But lastly here a link to a zoomable photo in the  KITL collection with a view from the third floor balcony of the Dutch consulate. Looking towards a gate and a building that looks important. It will make it easy to pinpoint the exact location of the old building. 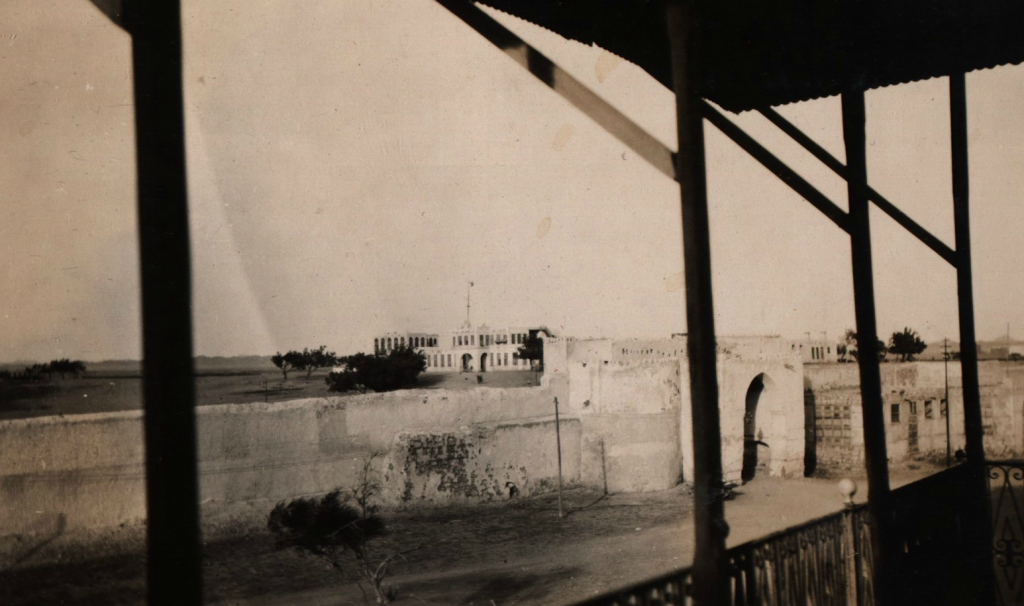