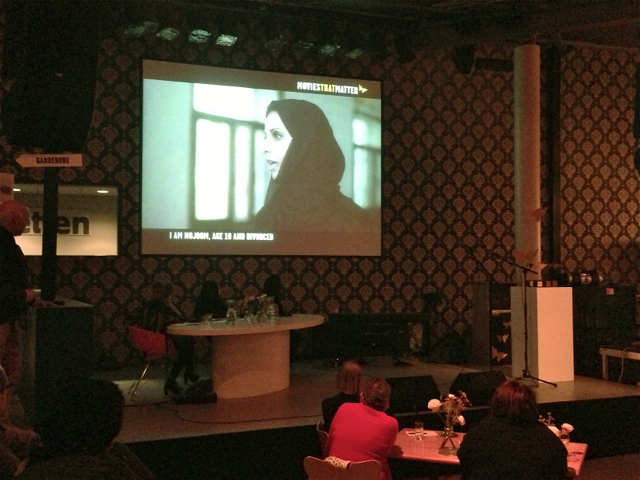 Panel with Yemeni director Khadija Al-Salami in The Hague, March 25, 2015.

It was in January in Jeddah that I was told to go and see a movie in March in The Hague. So I did. I usually, though not always, do what people in Saudi Arabia advise me to do. Listening is the profession of museum staff. Sometimes even with the eyes. The Filmhuis in the Dutch city, for centuries the residence of the counts and courts of Holland, is a friendly place, which once a year organizes a festival with ‘movies that matter.’ To turn the heads of judges and nobles, I think that is why they do it and do it there.

We met at the door, a small group of Arabs and Europeans, who have sailed the world with books and trade on their mind. Jumping borders where and when that is necessary or simply because it was possible. This time for an evening to share by the screen the pain and troubles of Nojoom, a young girl from Yemen in the movie: I am Nojoom, age 10 and divorced. A movie about women in Arabia – again – the skeptics might think. Such movies sit well with the progressive crowd in democracies, which projects great evils abroad by polishing its lamps at home. But actually, such a movie it is not. It is an inclusive movie that lends an ear to all sides of a difficult story, doesn’t turn maliciously critical and carries a great sense of visual humor. Najoom’s troubles are moreover matched by those of her loyal brother, which are more implied than told and might have been unspeakable ones.

For those in Europe who shiver with sharia, but shop for fair trade, I have a warning: the movie ends with a learned and wise sharia judge. His case started however with a desperate father, who in a fog of tribal traditions, fear and self serving ethics of a groom and his mother, arranged a wedding for his eight year old daughter to solve a very basic problem: to pay the rent and feed his family. But daughter Nojoom has a mind of her own. And a vision of another world that had been revealed to her on the streets of Sana’a after coming down from clouds and mountains, similar to those in Asir which I visited with artists from Saudi Arabia. To find out how that vision develops reality, you should go and see the film. I was not planning a review of it here or to reveal its story or cast performance. I wanted to post a picture I made afterwards of director Khadija Al-Salami speaking to the audience in a panel discussion, which inevitably comes with festivals, while her mind must have been with events in her country. Unfortunately it was a bit out of focus, so I leave you with an image of the panel in the dark.

And in essence there was something else that stuck and needed to be shared. The judge. Go to the film to see the judge who hears the case of Nojoom. A wise judge who has to forge from the ancient truth of sharia, tribal customs and human conscience in the orbit of a global information explosion a verdict that appeases all on the ground and all who listen in from far and away. What makes a judge these days, people might wonder. Or what does a judge need to let things not fall between two or many stools. It’s to think about this judge that the movie could have been made.